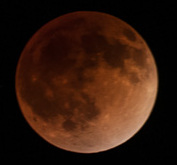 Several photos of the total eclipse of the moon shot from northern Phoenix the evening of April 14, 2014. This eclipse was a "blood moon," in which the moon looked the color of a desert sunset. The reason? Because "even when the Earth moves directly between the moon and the sun, filtered sunlight still shines through Earth's atmosphere, making the moon appear red.

A couple of photos of the "Big Dipper" constellation taken at the conclusion of the eclipse are also included.